NEW YORK, DECEMBER 14 – 65 years ago, on the 14th of December, Italy became a member of the United Nations. “Today more than ever we are working for an efficient multilateralism with the United Nations at its core, to ensure global peace and security, human rights and sustainable development,” the Italian Permanent Mission said on Twitter.

The anniversary was celebrated in front of the UN Headquarters with a photo-op bringing together all Ambassadors  of “Class 1955”. Indeed, 65 years ago – alongside Italy- Albania, Austria, Bulgaria, Cambogia, Finland, Jordan, Ireland, Laos, Libia, Nepal, Portugal, Romania, Spain, Sri Lanka (at the time Ceylon) and Hungary were also admitted. That December, UN membership rose from 60 to 76. 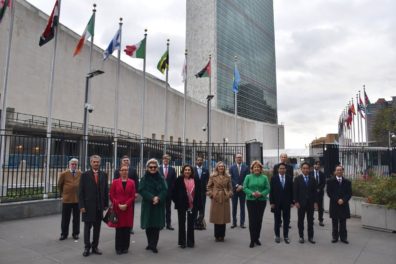 Compromise with the Kremlin

Italy was admitted to the UN at the end of a decade-long diplomatic journey. It took 10 years for the USSR to withdraw its veto, so that the Security Council could reach an unanimous consensus paving the way to the final vote by the General Assembly. This action was made possible by a compromise with the Kremlin, according to which a few Balkan nations, ‘satellite’ states of Moscow, were also ammitted.

This agreement was conducive to a new international climate of peaceful coexistence, following a series of recent events which had significantly contributed to easing tensions between the global East and West- namely the death of Stalin in 1953, the signing of a peace treaty between Austria and the winners of the Second world war, and the Big Four Conference (USA-France-UK-USSR) held in Geneva.

On the website of SIOI, an essay by Francesco Perfetti narrates the process on the basis of diaries, official documents and diplomatic correspondences.

In 1955, a journey that had been nothing but bitter for Italy finally came to an end. In 1945 Rome had been denied the opportunity to participate at the San Francisco Conference (April 24th-26th) -which was to elaborate a blue print of the new, international peace organization- as an observer. The then Prime Minister Alcide De Gasperi declared his “profound disappointment”, and in his speech to the Council of Ministers underlined the injustice of such decision.

Francesco Paolo Fulci, Permanent Representative of Italy to the UN between 1993 and 1999, explained later how Italy’s rejection in 1945 did not take into consideration the two years of Italy’s ‘co-belligerence’ at the side of the Allies after the Cassibile armistice in September 43: “The winning powers had forgotten how, together with the winners of World War I, Italy occupied a permanent position in the Council of the League of Nations since its establishment. But, what was most severe, the yearning of the resurrected Italian democracy -eager for an international recognition that Italy’s chapter of fascism, of war and isolation had finished- was mortified”.

In April 1950 Italy took over the trusteeship of Somalia under a UN mandate. Nevertheless, the doors of the UN remained closed, as Moscow continued with its ‘no-s’ and the Italian government with its protests. The negotiations continued, until Italy’s diplomat  Alberico Casardi, informed the Ministry of Foreign Affairs that the negotiations had “finally entered a new, decisive phase” since the Americans had accepted not to oppose themselves to the satellite states of the USSR.

All 56 countries present for the vote, voted in favor of Italy’s admission. Egidio Ortona, the Ambassador in Washington, noted the conclusion of this chapter in his diary, and wrote the following words of genuine satisfaction in his on the 14th of December: “Let’s write a telegram which evokes the complacency for this joyous ending”. (SB@OnuItalia)

Security Council: Zappia, UfC’s proposal “the most detailed and comprehensive on...