NEW YORK, 17 MARCH – Michelle Bachelet, the UN rights chief said on Tuesday that empowering women and girls to participate fully in public life is both the right and ”smart thing to do”, speaking on a day that saw history being made with the first ever address to the UN by a woman Vice President of the United States.
”Speaking up, and contributing to decision-making, is the right of every human being – women, just as much as men”, UN High Commissioner for Human Rights  told the 65th session of the Commission on the Status of Women. ”It is also a powerful lever for better policy – for everyone”.
She cited evidence demonstrating conclusively that where women are well represented in government, there is more investment in social protection and a better focus on climate justice.

The UN rights chief noted that during the pandemic, countries led by women leaders adopted sound policies based on scientific expertise for the people’s good ”not soundbites based on noisy drama and the interest of elites”.  ”We cannot airbrush reality: women’s equal representation in political life is advancing very slowly’‘, she said, adding that at the current rate, gender parity in national legislatures would not be reached before 2063, nor would the number of women and men heading Government be equal before 2150.
The High Commissioner encouraged all leaders to appoint 50 per cent women to their Cabinets, ensure broader diversity and inclusion and harness the use of temporary special measures to, among other things, recruit and train women candidates and target women for positions in politics and government. Bachelet highlighted the need to work with women who fight for equality and social justice, many of whom are young activists operating in restricted civic spaces ”patrolled by thugs and trolls”.
”As a woman who has held a position of power, I am also aware of the taxing impact of toxic misogyny and sexism. It is vital to keep speaking out against it”, upheld the High Commissioner and she concluded with her support ”to fast-track the full and equal participation of women, in all their diversity, in public life, for everyone’s benefit”.
US Vice President Kamala Harris told the commission in a video address that ”the status of women is the status of democracy”.

Along with other things, democracy protects human rights, upholds the rule of law and is a means to shared prosperity, in which everyone has an equal voice, she said, adding that it is a work-in-progress that requires constant vigilance and improvement.
”Even as we confront a global health crisis and an economic crisis, it is critical that we continue to defend democracy”, she stressed. ”We know the status of democracy depends on our collective commitment to those values articulated in the Universal Declaration of Human Rights’‘, she said and concluded that the ”participation of women strengthens democracy”. 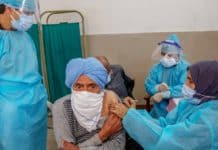