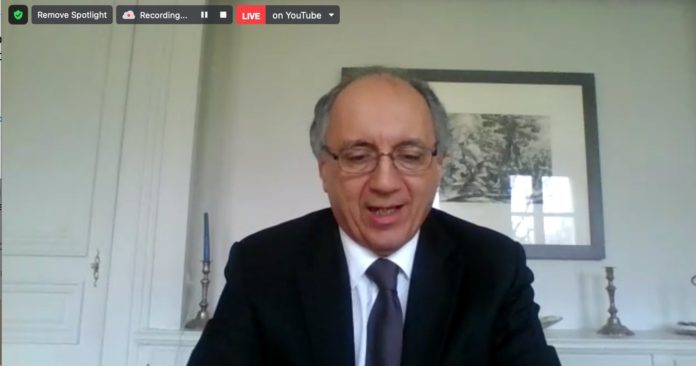 GENEVA, FEBRUARY 9 – “Today, we have the opportunity and the moral duty to build back better and greener”, the Italian Permanent Representative to the International Organizations in Geneva, Gian Lorenzo Cornado, said today during the Webinar on ‘Climate Change Priorities on Health, Human Rights and Labour’ co-hosted by the government of Bangladesh e the Climate Vulnerable Forum.

“I’m confident that the Paris Agreement, the 2030 agenda and the European Green Deal will guide us towards the post pandemic recovery”, Cornado added in his address, in which he defined climate change “one of the biggest challenges of our time”, with a profound impact on so many aspects of life: “Biodiversity, ecosystems, human and animal health, human rights, gender issues, economy, agriculture, are some of the sectors affected by climate change”.

2021 a key year for the environment

As a Country that has always been ambitious on climate action, “in a key year for the environment”, Italy intends to reaffirm and strengthen its role towards a virtuous, ambitious and supportive path, said the Italian Ambassador pointing to a number of upcoming events, including the Conference of Parties of the three Rio Conventions as well as by the launch of the UN Decade on Ecosystem Restoration and by the UN Food Systems Summit, the UN Conference on Oceans and the Fifth United Nations Assembly on the Environment, all to be held this year. Furthermore, Italy and the UK will lead multilateral efforts in their capacities of Chairs of the G20 and of the G7 and as co-Chairs of the UNFCCC COP26.

Cornado stressed that, in a fragmented international system, multilateral fora such as the G7 and the G20 need to speak with a single voice when it comes to addressing the most urgent global challenges. This year the two agendas are aligned in identifying climate change as a high priority. The G7 is in fact focusing on issues such as global health, climate and trade, while the G20 Presidency agenda is centered around three main pillars: People, Planet and Prosperity.

The Ambassador offered some thoughts on the inter-connections between human rights, environmental protection and the impact of climate change: “Loss of biodiversity, extinction of species, pollution and the overall degradation of the earth´s ecosystems have a significant impact at global level on the full enjoyment of human rights and fundamental freedoms, including the right to safe drinking water and sanitation. Climate change does not impact all persons in the same way, it exposes to increasing risks mainly those belonging to vulnerable groups. As member of the Human Rights Council, Italy supports the process to recognize the right to a healthy environment as a fundamental right of the individual, and as such, Italy has been among the main sponsors of the Resolution 45/30 on “Realizing the rights of the child through a healthy environment”.

Concerning the Labour and Climate change perspective, a green recovery from the pandemic crisis will be essential to achieve sustainable development, as well as global economic prosperity: “Reskill and upskill the workforce will also be of the utmost importance; the Italian Presidency of the G20 will support education, capacity building and training, with particular attention to the younger ones”. (@OnuItalia)