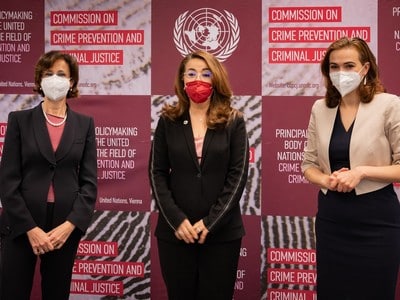 VIENNA, MAY 17 – “Italy is at the forefront of migratory flows and remains fully committed to preventing and combating” migrant trafficking, “particularly in the Mediterranean”, as well as “protecting the human rights of trafficked migrants, starting with the right to life”, the Minister of Justice, Marta Cartabia, said today in Vienna during the 30th session of the UN Commission on Crime Prevention.

Ms. Cartabia opened her her address by recalling judge Giovanni Falcone, and the role of the Palermo Convention which -with its Additional Protocol against the smuggling of migrants- represents the main legal instrument at a global level to address this phenomenon: “We are confident that the recently launched review mechanism, strongly supported by Italy, will contribute to make them more effective,” she added. 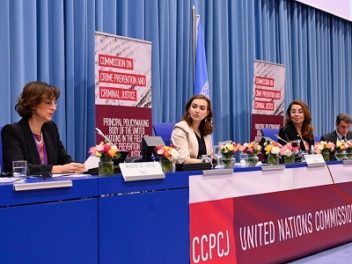 On the sidelines of the Commission session, Cartabia attended two bilateral meetings, one with her Austrian counterpart, Alma Zadić, the other with UNODC Director, Ghada Fathi Waly. In her speech, she underlined that Italy coordinated the rescue operations of more than 25 thousand migrants in 2020. However, “the dimension of migratory flows requires a choral effort. The international community must intensify its efforts.”

“Ruthless criminal organizations exploit migrants’ natural aspirations for a better life, putting them at serious risk. Tragedies continue to occur,” noted Cartabia, stressing that “there is still much to do, starting with prevention.” “This is why,” she explained, “we value and support UNODC’s awareness campaigns and programs, aimed at addressing the root causes of trafficking”.

According to Cartabia, it is “essential” for law enforcement and judicial authorities in countries of origin, transit and destination to cooperate and work together. It is not by chance that Italy promotes, in collaboration with UNODC, “innovative projects aimed at strengthening collaboration with African countries in the fight against migrant smuggling, and other related crimes, in particular human trafficking”. However, there is more to be done: “We must also strengthen our judicial cooperation. The assignment to Italy of a liaison magistrate from Nigeria was particularly fruitful, and has been replicated elsewhere. The deployment of additional liaison magistrates from African countries to Italy has been planned, and an agreement will soon be concluded with Niger, also thanks to the support provided by the UNODC. Further initiatives are underway to strengthen judicial cooperation between Italy and other African countries, in particular Mali and Senegal”.

Today, Frontex released data showing that between January and April 2021 migrants arriving on the central Mediterranean route more than doubled (+157%) compared to the same period in 2020, and have already reached 11,600.

In April, the arrival of 1,550 migrants, mostly Tunisians and Ivorians, represents twice as many as in the same month of 2020. In the first four months of 2021, a total of 36,100 arrivals were recorded in the European Union, up about one-third from 2020. In April, more than 7,800 arrivals were registered, a number four times higher than the all-time low in April 2020. (@OnuItalia)