GENEVA, JUNE 28 – The entertainment magazine Variety presented Cate Blanchett with an award for her humanitarian work with UNHCR, the UN Refugee Agency, and the actress and director immediately turned the spotlight on Alessandra Morelli, a woman whose career has been devoted to helping refugees.

But rather than soaking up praise herself, Blanchett singled out Alessandra Morelli, UNHCR’s representative in Niger, for attention, describing her as “absolutely inspirational”.

“She’s been working tirelessly with the UN Refugee Agency for almost 30 years in emergency and conflict areas,” Blanchett said.

“I’m sure that the mental and physical cost has been enormous. And she’s been making sure that refugees had the help and the hope and the resources they need not only to survive, but to thrive,” Blanchett said.

In 2014, a suicide car bomb exploded next to the vehicle in which she was travelling in Mogadishu, the capital of Somalia. Morelli survived, but seven others were killed.

Her career with UNHCR includes postings in the former Yugoslavia, Afghanistan, Rwanda and Indonesia after the 2004 tsunami. In 2016, she led the agency’s first emergency response in Greece, which has seen more than 1 million people fleeing famine, war and violence.

Since October 2017, she has been the representative in Niger, a large operation in the heart of the Sahel which is a crossroads for the central Mediterranean migration route to Europe via Libya. Recently, UNHCR announced that violence in parts of north-western Nigeria had forced an estimated 23,000 people to seek safety and security in Niger in April.

‘My job at UNHCR is to ensure that people who are without their homes, who have fled their countries, are fed. We ensure they receive clean and drinkable water. We ensure that the sick can access healthcare,” Morelli said.

“We are basically saying: ‘Don’t worry, you’re not alone’ to refugees who are at the most alone moment of their lives. We try to make them feel safe,” she said. The pandemic has made that task more difficult and UNHCR has responded by distributing soap as well as disseminating public health messages.

Blanchett described Morelli is an example of resilience. Morelli, for her part, applied the term to many of the refugees she has met. (@OnuItalia) 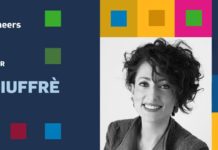