NEW YORK, MAY 21 – The transformative power of culture as a key enabler for the implementation of the Agenda 2030, as well as its role in promoting social inclusion and development, was on the agenda today of a UN high-level meeting co-organized by UNESCO at UN Headquarters in New York. The one-day thematic debate took place in accordance with General Assembly Resolution 72/229 on “Culture and Sustainable Development” and marked both the World Day for Cultural Diversity for Dialogue and Development (21 May) and the International Year of Indigenous Languages (2019).

Participants discussed the role of cultural diversity as the common heritage of humanity, culture and education as foundations of sustainability and culture as a lever of innovation, empowerment and equality. “Italy strongly supports the UNESCO strategy promoting “cultural industries” as an engine for sustainable development”, said Stefano Stefanile, Deputy Permanent Representative of Italy to the United Nations: “In this framework, Italy is particularly active in promoting the role of traditional food production, especially through Micro Small and Medium Enterprises. The role of food as an instrument of culture will also on the agenda of the “IV UNESCO Global Forum on Culture and Cultural Industries”, which Italy will host in Parma next September”.

Stefanile also recalled initiatives that put Italy in the forefront of the efforts to protect culturale heritage: “As an historically and unfortunately privileged target for the illegal trade of cultural goods, 50 years ago Italy established a specialized law enforcement unit which paved the way for an effective action on the Italian territory and also for creating a cooperation framework with our international partners and I am referring to our Special Command of Carabinieri“.

The Italian ambassador spoke of the “Unite4Heritage” Task Force established by Italy in 2016, and of the adoption in 2017 of Security Council resolution 2347 on the protection of cultural heritage in situations of armed conflict which Italy and France co-sponsored. Italy is also co-chair, together with Cyprus, of a Group of Friends, in New York, devoted to the protection of cultural heritage. (@OnuItalia) 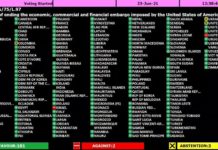 Beirut: Del Re presides over coordination on Lebanon emergency