BRINDISI, FEBRUARY 28 – Speed, precision, effort, efficiency; these are all words that describe the UNHRD depot in Brindisi, Italy that exports emergency humanitarian aid. Under female leadership, Marta Laurienzo has been the manager of the United Nations base since 2015. Yesterday, Laurienzo hosted Italy’s Vice Minister of Foreign Affairs, Emanuela Del Re.

“The [UN] depot in Brindisi reflects the spirit of solidarity present in the community that hosts it, while also representing a further opportunity for economic development within it,” said Del Re. The Vice Minister made her statement just as the base was prepping for a large humanitarian aid project managed by the World Food Program. The project is part of an international network that seeks to “pre-position” aid in depots to quickly and efficiently respond to humanitarian emergencies. The network is composed of 88 entities that include governments, international organizations, and civil society.

Del Re also visited the logistics base of the United Nations’ Global Service Center (GSC). The center, which occupies an area of circa 370,000 meters squared and 65 buildings all in service of the Ministry of Defense, provides the logistical support of all the operations (military and civil) of the United Nations. The ministry also provides support to the Center in the form of digital technologies, communication technologies, and environmental impact analysis. The Vice Minister mentioned her pride in having Italy host the GSC in Brindisi, and stated that the GSC was a “center of excellence within in the UN system and is a crucial hub that adds value in the operational support of peace.” In doing so, Del Re reassured that Italy will provide the GSC with all the assistance it needs to increase its activities 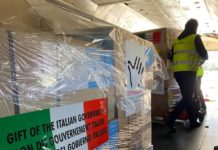 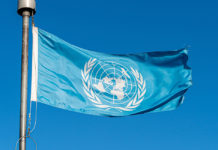