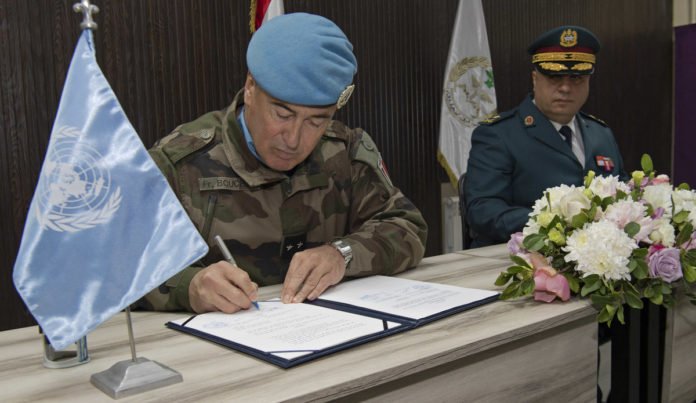 BEIRUT, 3 FEBRUARY – UNIFIL and its strategic partner, the Lebanese Armed Forces (LAF),  signed a Memorandum of Understanding allowing for the two forces to enhance cooperation, after a decade, in humanitarian demining within the UN Mission’s area of operation in south Lebanon. The Memorandum, signed by UNIFIL Chief of Staff Brigadier General Frédéric Boucher and the Director of the Lebanon Mine Action Centre Brigadier General Gihad Al Bechelany, sets out a framework of cooperation for UNIFIL assistance, without prejudice to its mandate and within existing capabilities and resources, to lebanese humanitarian demining operations in UNIFIL’s 1,060 square kilometres area of operation between the Litani River and the Blue Line.
In the wake of the 2006 war and till 2010, UNIFIL deminers conducted, within the framework of UN Security Council resolution 1701, humanitarian demining in order to protect civilians and to facilitate safe access to agricultural land. Due to operational requirements of its mandate to facilitate the Blue Line marking, and to ensure the safety of patrols carried out by UNIFIL peacekeepers, these activities were suspended in 2010.

”Now, after 10 years, the operational situation allows us again to resume our efforts in the area of humanitarian demining – said Boucher after signing the Memorandum in the LAF’s Regional School for Humanitarian Demining in Hammana, east of Beirut. 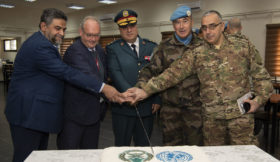 ”Our special cooperation that starts today, reflects our great aspirations. Despite the challenges and difficulties, we believe that our battle against mines is a winning and settled battle – he added – We also believe that close cooperation between the LAF and UNIFIL, the official institutions and local and international NGOs is the title for success in reaching our highest common goal”.

Despite progress, large swathes of land in south Lebanon are still contaminated with landmines. UNIFIL currently has peacekeepers from Cambodia and China undertaking the deadly task of clearing contaminated areas along the 120-km Blue Line and around UN positions in south Lebanon. In 2019 alone, they cleared more than 42,000 square metres of land, and destroyed 3,358 anti-personnel mines.