WASHINGTON, APRIL 12 – Italy is considering to appoint a special climate envoy, the Italian Foreign Minister Luigi Di Maio said to the Italian press after meeting U.S. Secretary of State Antony Blinken, which was also attended by the U.S. administration’s climate “czar”, John Kerry. Di Maio is currently in Washington for a two-day celebration in honour of the 160th anniversary of relations between Italy and the United States. 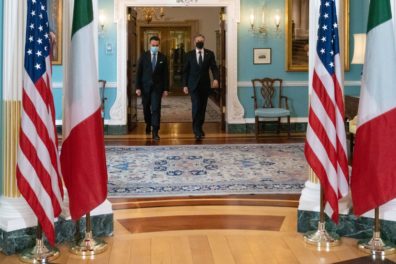 Italy’s G20 and Cop 26 leadership were high on the agenda of the conversation with Blinken and Kerry, the Foreign Minister said to an Italian tv,  adding that  the meeting also included “the new Italian ministry of ecological transition”, created with the goal to unite private companies and public stakeholders in the development and support of green policies. “More investment in green policies means more jobs for our citizens,” the Minister added.

Di Maio spoke about today’s meetings, including one with immunologist Anthony Fauci. “With Fauci and Blinken we agreed on the need to accelerate the vaccine campaign, to organize ourselves better as the West, also in regards to geopolitics of the vaccines from the eastern quadrant.” The American policy, however, doesn’t seem to be changing: the aim is to complete the vaccination of Americans before giving Europe a hand. (@OnuItalia)

Conte to UN event on financing for development: “Turn this crisis...