LONDON, OCTOBER 21 – On the occasion of its 25th birthday, EMERGENCY – a humanitarian non-governmental organisation that has offered free treatment to over 10 million victims of war, landmines and poverty since 1994 – is proud to
present ‘Zakhem | Wounds: When War Comes Home’, a photographic exhibition by Giulio Piscitelli. Opening on November 5th, the London event follows the success of the exhibition in Italy in both Milan and Venice.

In 2018, Italian photographer Giulio Piscitelli visited EMERGENCY’s Surgical Centres in Kabul and Lashkar- Gah, Afghanistan. There he met war victims who continue to face public indifference after 18 years of conflict and vowed to tell their stories: stories where violence punctures daily life without warning, stories that reveal the wounds – zakhem in Dari – left by the conflict. Shell and shrapnel wounds take centre stage in the exhibition because ultimately, war begins with them, but deeper wounds are also revealed here, like the fear and exasperation that never leave those living in the midst of violence.

Giulio Piscitelli was drawn to photography after graduating in Communication Sciences, collaborating with various news agencies. Since 2010 he has worked as a freelancer, producing photo-journalistic reportage on international current affairs. He documented the coup in Egypt and wars in Syria, Iraq and Ukraine. His first long-term project, dedicated to the migrant crisis in Europe, led to a book, Harraga.  His new set of photos on display at the Old Truman Brewery show the Afghan people’s enduring strength and transport you into a world that is illuminated, almost unreal – a world outside time and space. The true nature of war is that it is everywhere and never-ending and Piscitelli’s work has made these wounds comprehensible, simple, powerful and eloquent.

“We have chosen to celebrate our 25 th anniversary by showing everyone, through Giulio’s incredible photographs, what EMERGENCY has been doing since its inception. In treating victims, year after year, we have understood something simple: whatever the weapons, whatever the reasons, war always has the same outcome: deaths, casualties, people suffering. It is by facing this suffering that we have started to develop the idea of a community in which relationships are based on solidarity and respect. A society without war, forever,” says Gino Strada, Founder of EMERGENCY. (@OnuItalia) 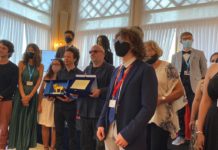 UNESCO: Art of the Neapolitan Pizza inscribed on the Representative List...