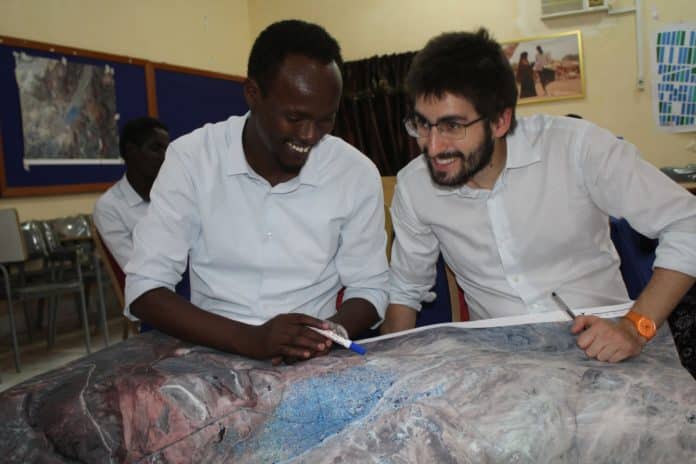 ROME, APRIL 12 – Francesco Tonnarelli, 32, is an Architecture Studies graduate from the University of Ferrara. After working for a series of design firms and as a teaching assistant, he followed up his studies with a postgraduate Master in Advanced Studies in Urban Design at the Federal Technical School of Zurich. Eventually discovering that his interests were in urban studies and spatial planning, he applied for a Junior Urban Planner position with UN-Habitat. Since then, he has been deeply involved in this UN Programme, having offered his expertise and experiences to several Country Offices.

What interests, educational and professional experiences brought you to where you are today?

I studied architecture in Ferrara and already through my master thesis I focused into urban studies. My final master project was based in Egypt, where I supported my supervisor in consulting an urban regeneration project -lead by the UNESCO office- at the World Heritage site of the historic city of Cairo. Looking back, my three month stay in Egypt also represented a first brief approach to the world of the United Nations, although we worked rather independently from UNESCO.

After graduation, I worked for a series of small design firms in Italy and was a teaching assistant at the University, before continuing my studies with a postgraduate master at the Federal Technical School of Zurich. Slowly, I began to realise that architecture -although very engaging- was not my main goal. What truly attracted me was the urban dimension of this field of study.

Upon concluding my postgraduate master, I moved to Berlin, where I worked for an architecture office, whose projects, however, were deeply embedded in the notion of urban design and regeneration. I helped design a housing project in the periphery of Hamburg, and was involved in the construction of the M9 museum in Mestre.

Eventually, I saw an opening as a Junior Urban Planner with UN-Habitat. I applied and, to my greatest delight, I was selected. I moved to the headquarters in Nairobi, Kenya, where I started working on the so-called ‘Urban Planning and Design Lab’, which at the time was an integrated office, bringing together experts from across disciplines: spatial planners, economists and legislators. This multidisciplinary framework is of great importance in the field, because every project requires not only a plan in terms of spatial, technical characteristics, but also a strategy to finance the project in question, and a legal mechanism which supports the municipality in implementing the plan and ensuring it runs smoothly.

What is the mandate of UN-Habitat?

UN-Habitat is the UN Programme for Human Settlements. Despite being a relatively small agency, we have a very vast mandate. We are the custodians of the entire SDG 11: Sustainable Cities and Communities; and the champions of the UN Urban Agenda: a document which is to guide the direction of urban development for the next 20 years.

We have a wide range of operations, with our engagement varying significantly depending on the context of the country in question. We are very active in conflict areas, having offices across Afghanistan, Iraq, Libya, Syria, Congo, Yemen and Somalia. But we also work in places that don’t necessarily have a crisis setting. In our work, we always try to advance resilience and preparation to natural disasters, alongside the digital agenda. 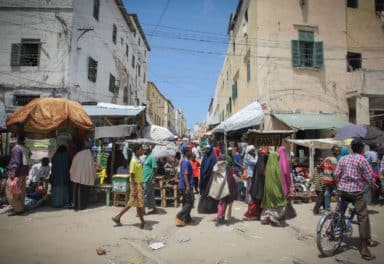 We are one of the few UN agency to have its headquarters in Africa. In my view, this is a very significant characteristic of the Programme, since Africa is becoming the centre of urbanization across the world, therefore making the needs for resources and expertise extreme.

What projects and initiatives have you worked on in the course of your journey in UN-Habitat?

My journey began in the Urban Planning and Design Lab. The Lab was responsible for supporting offices in the field, as well as developing its own projects. A lot of my work at that stage revolved around supporting the UN-Habitat office in Somalia in the implementation of two pilot projects for the urban regulatory framework: a city-wide master plan and a city expansion plan. As my engagement with Somalia intensified, I became the point person for project development and implementation in fragile contexts. I was sent to the Afghanistan Office to support and consult a public space project in Kabul, and the development of a settlement for displaced people in Herat.

The human resources in the Lab were rather limited considering the great variety of projects we were working on, so we were all involved in many, many initiatives. I participated in a project which spanned across 10 countries -among which Brazil, Nigeria and Thailand- aimed at advancing transformative urban innovation in the field of transport resilience and urban climate. This job, compared to others, was less technical and more political. I was asked to facilitate the dialogue between the investors and the beneficiary municipalities and stakeholders.

As my experience with the Urban Planning and Design Lab ended, I was offered a staff position in the Somalia programme, which began at the start of 2019. Today, my work is characterized by a greater geographical focus. Within the Somali context, I manage big projects of a varied nature: from durable solutions to displacement, to more ‘traditional’ urban regeneration projects. 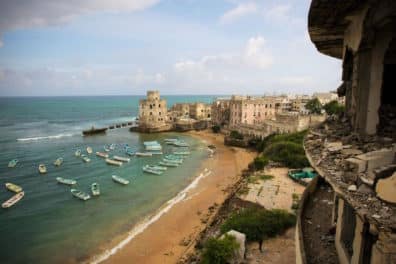 Lately, my focus has been on local governance, through the so-called ‘Joint Programme for Local Governance and Decentralized Service Delivery’, which is run alongside the agencies of: ILO, UNDP, UNCDF and UNICEF. The part of the project in which I am involved focuses on urban planning and land management capacity. We are looking to implement an Urban Planning Unit in each of Somalia’s federal states, which will work on urban analysis and plans at various scales.

A further project I am currently focusing on concerns the city of Kismayo. Kismayo is characterized by a large number of displaced people, which the Somali government now wishes to relocate. To this purpose, they have reserved an area of 25 km² to the construction of a new city, meant to host Kismayo’s displaced population, giving them a proper place to live and conduct their lives, freely from the constant risk of eviction. So far, we have held planning workshops with all the stakeholders involved, and have drafted a first proposal for a potential layout of the new site, one which fulfils the expectations of all the parties involved. 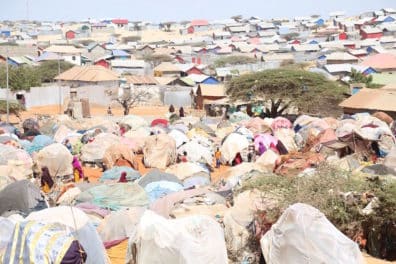 We are now coordinating the funding agencies in the development process of a comprehensive, coordinated action-plan. The area which has been reserved to this new site is located close to a river -one of the only permanent rivers in Somalia- so we are, for example, investigating possible agricultural opportunities, which would provide the community with a means of self-sustenance. FAO is currently the stakeholder responsible for the construction of an irrigation channel. IOM and RNC are also funding agencies, with the goal to implement housing units, streets and public services in the area. It’s of pivotal importance for all the investors involved to talk to one another and coordinate their efforts and resources, so to avoid overlaps and maximize the value of these investments.

What unique challenges arise in fragile contexts such as that of Somalia?

Fragile contexts give rise to unique challenges. Some are political and they often slow down progress and project implementation. Somalia was recently supposed to hold new elections, but no electoral modality was successfully agreed upon. The current President’s mandate has therefore come to an end without any new elections having been organized. It’s still not clear when and how the next elections will be held, and the political situation is at a stalemate. This could impact negatively so much of the progress that we achieved in long years of works on peace, security, stability, and prosperity in Somalia.

Furthermore, the Al-Qaeda-linked Al-Shabaab Islamist militant group remains active, with the federal government controlling only part of the territory, despite the support of the African Union force.

Another example could be Somaliland, which declared unilaterally independence at the start of the civil war in 1991, and has since then achieved great progress towards a functional democracy and healthy economy. Somaliland considers itself completely autonomous from the Federal Republic of Somalia, but is not recognised by the international community, and is the FRS who holds the seat in the General Assembly.

These situations have to be treated very carefully. Our objective as the UN is to always support and collaborate with the legitimate country representatives, without influencing local processes and avoiding interferences. 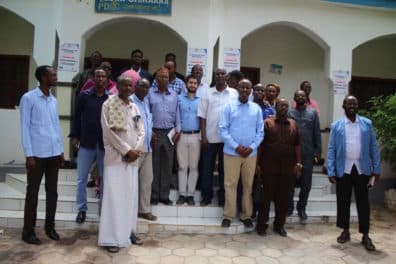 From a governance perspective, certain communities and community representatives are easier to reach in fragile contexts than others. Often, the communities that are harder to reach are also the most vulnerable ones. Involving underrepresented people, and finding ways to meaningfully integrate them in the conversation, can be very difficult. Security plays a big role in this challenge: I have been to Mogadishu a thousand times, but my interactions with the population -in particular the most vulnerable groups- have been challenging and most of the time restrained.

A further problem with fragile contexts is that the constant state of emergency tends to eclipse long-term goals and aims.

What is the value of governance in the work that you do?

UN-Habitat endorses a participatory approach at every level, we strongly support and advocate for this in everything that we do. All the projects we develop, consult and help implement are characterized by an outreach and advocacy component, in which we bring people, stakeholders and community representatives together to share and discuss their needs and expectations. 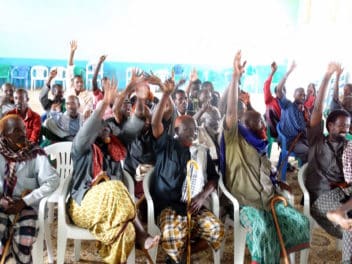 At the end of 2019, for example, we ended a very successful participatory project in the biggest city of Somaliland, Hargeisa: the Urban Vision Week. Building up to this week-long event, we held a long preparatory stage. A communal assembly was organized for each district of the city. The representatives of each district were then invited to participate in a variety of workshops during the final Urban Vision Week, which aimed at developing a vision for the city’s development in the next 20 years. We involved universities, vulnerable groups like women, disabled people, civil workers and -for the first time- children involved through a more practical, playful workshop: using the digital tool of Minecraft, they were asked to design a public space. We even decided to make ‘Child Friendly City’ the slogan of the Vision Week. Somalia is an extremely young country: designing a city for its young population, which will then be the one using these spaces in the future, is of pivotal importance. 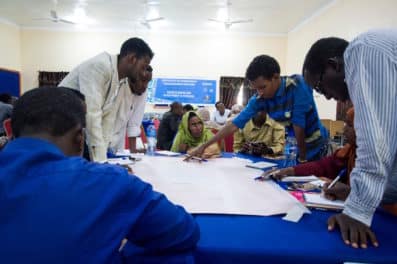 You can find the full report on the Urban Vision Week at this link: https://www.dropbox.com/s/qmjc9na2yg0smm3/hargeisa%20UVW_report.pdf?dl=0

What advice would you give to a young person looking to work for UN-Habitat?

Currently, there is a big need for technical urban planning and spatial planning skills. However, other than having a good technical background, it’s also important to be interested in other fields and disciplines, since cities are a unique agglomeration of economic, political, social and legal factors. Without this knowledge you will miss the bigger picture. (@OnuItalia)

G20 Culture: three webinars, the first on the fight against illicit...