ROME, APRIL 15 – Concluding his visit to Italy, UN High Commissioner for Refugees Filippo Grandi commended the country for ensuring access to asylum throughout the COVID-19 emergency, despite the many challenges and growing migratory pressures it faces at its sea and land borders.

Grandi welcomed Italy’s efforts to uphold the principles and processes of refugee protection as well as its constructive approach to improve the balance between responsibility and solidarity underpinning the negotiations on the proposed EU Pact on migration and asylum. New initiatives are in the pipeline including ussing the best practice of the “humanitarian corridors”.

The international refugee protection initiatives in the Mediterranean and Africa, the current negotiations on the Migration and Asylum Pact proposed by the European Commission, and the importance of defending the human rights of refugees and promoting their full integration in host countries were the topics on the agenda of today’s meeting in Rome between Prime Minister Mario Draghi and the UN High Commissioner.

Di Maio: Italy with UNHCR in Libya and Sahel

Grandi was also received at the Ministry of Foreign Affairs. New initiatives to strengthen the already excellent collaboration between Italy and UNHCR were at the center of the conversation with the Minister Luigi Di Maio. Di Maio expressed his appreciation for the renewal of the High Commissioner’s mandate, and reiterated Italy’s support for UNHCR’s activities in the field of assistance to migrants and refugees, emphasizing its strategic importance in areas of particular interest for Italy, such as Libya and the Sahel. 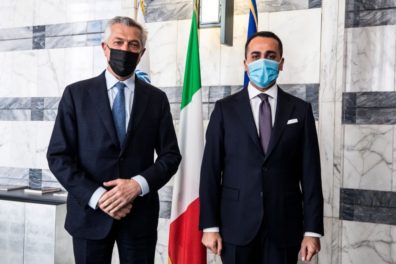 The Minister also confirmed financial support for the UNHCR-OIM Joint Plan for Libya, and called for the full resumption of evacuation and resettlement operations for vulnerable refugees under the Emergency Transit Mechanism (ETM).

The example of humanitarian corridors

Italy – said Di Maio – remains committed to ensuring complementary channels of migration for beneficiaries of international protection, and trusts that the good practice of the “humanitarian corridors” can be replicated in other European countries. The theme of “humanitarian corridors” was also touched upon during Grandi’s meeting at the with Luciana Lamorgese, Italy’s Interior Minister. Grandi spoke also with the Deputy Minister of Foreign Affairs Marina Sereni. Among the topics discusses were: the emergency affecting Ethiopia and South Sudan, as a result of the humanitarian crisis created by the conflict in Tigre, and -more broadly- the scenario that affects the issue of refugees in light of the Covid-19 pandemic.”  When I have to explain to young people the importance of UN I always use the extraordinary example of UNHCR”, said Sereni.

From Mattarella to the Quirinale

While in Rome, the High Commissioner was received at the Quirinale Palace by the President of the Italian Republic, Sergio Mattarella, with whom he exchanged views on global challenges, on the need for predictable collective responses in Europe, and on how people fleeing war and persecution can be protected by open, well managed asylum systems. With Minister Lamorgese, he underlined how “it is crucial that Italy stays among the nations upholding the right of asylum — and there has to be greater solidarity in Europe in sharing the responsibility to give refuge to those fleeing war and persecution.” Minister Lamorgese, on her part, expressed her willingness to strengthen and intensify the common initiatives for the receiving of refugees and displaced persons, with particular reference to the “humanitarian corridors”. The conversation led to a shared agreement regarding the need for a constructive approach in the defining of the new European Pact on Immigration and Asylum, oriented towards the establishment of an effective solidarity between member countries.

During his visit in Rome, Grandi also visited Centro Astalli, the Italian branch of the Jesuit Refugee Service-JRS. The High Commissioner met men and women of various nationalities (Congo, Iraq, Syria, Mali, Nigeria, Azerbaijan, Tajikistan, Venezuela, Cameroon), who told their personal stories, projects and hopes, and the stories of those who in Italy seek protection, rights and justice.

The meeting demonstrated that, even in times of pandemic, integration in Italy remains one of the key issues to be resolved, a note from the Centro said. “Integration is a major challenge for refugees living in Italy,” Grandi agreed: “They spoke to me at length about their priorities and concerns, and I acknowledged their desire to be heard and seen as making an active contribution to their host community. Institutions must commit themselves to overcome the logic of emergency, and arrive at long-term, structural measures that provide real opportunities for inclusion. These opportunities are necessary not only for the refugees, but for the entire country”.

For about 40 years, Centro Astalli has been engaged in activities and services with the aim of accompanying, serving and defending the rights of those who arrive in Italy, fleeing from war and violence, and not infrequently from torture. (@OnuItalia)

Beirut: Del Re presides over coordination on Lebanon emergency