NEW YORK, AUGUST 21 – Italy stands beside the victims of terrorism. Assisting victims and  listening to their stories of resilience is key to our fight against terrorism, the Italian Mission to the UN stated on Twitter marking the second International Day of Remembrance of the victims of terrorism. The Italian Permanent Representative Mariangela Zappia attended the inauguration of a commemorative photo exhibit on “Surviving Terrorism: The Power of Resilience” at the New York headquarters. Survivors of terror attacks took part in the event, speaking out against hatred and sharing their experiences.

The General Assembly established 21 August as the International Day to honour and support the victims and survivors of terrorism and to promote and protect human rights and the rule of law to prevent and combat terrorism. The scars of terrorism “run deep”, and while they may fade with time, “they never disappear”, the Secretary General Antonio Guterres said on Wednesday. At the launch of the photo exhibition, the UN chief remarked the threat of terrorism and violent extremism is “among our most complex challenges”. He painted a picture of “horrific attacks” in Kabul, Cairo, Nigeria, Burkina Faso and other locations around the Lake Chad Basin and around the world.

Earlier this year, Mr. Guterres met with survivors of terrorist attacks whose “courage and resilience” moved him. “Their message was clear and simple”, he said “Let us turn these harrowing experiences into powerful and positive forces for change”.

Among the survivors of terror attacks taking part in the event was Sarah Tikolo from Kenya. With a four-month-old son, Sarah became a widow at the age of 21, on 7 August 1998, when her husband Geoffrey was killed in the United States Embassy attack in Nairobi. Thelma Stober, of the United Kingdom, suffered “significant and permanent injuries”, including the loss of a limb and damage to her internal organs, as a result of the 7 July 2005 terror attacks in London, during which 52 mostly-commuters died on their way to work, and hundreds were injured. Meanwhile, Air Canada Flight Attendant Maureen Basnicki was on a layover in Mainz, Germany, when her “beloved husband, Ken was murdered in the 9/11 attacks in 2001”.  She called on the UN “to mandate and strongly recommend that cross border victims…are fully supported by their home country, and to ensure that this support is available not just in the beginning, but also for the long-term”.   (@OnuItalia) 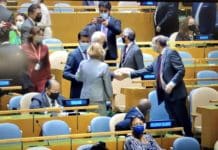 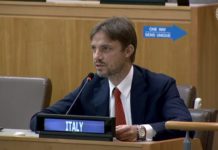 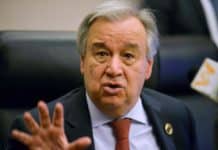