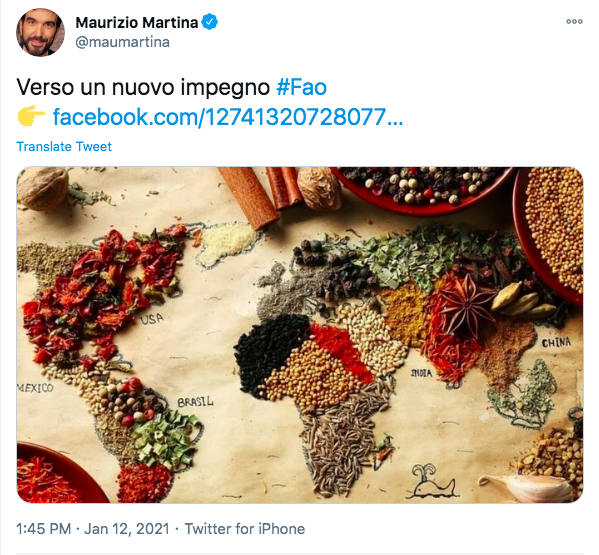 ROME, JANUARY 12th – PD representative and former Minister of Agriculture Maurizio Martina is leaving his position at Parliament to take on the prestigious role of Deputy Director-General of FAO. Martina himself made the announcement on Twitter and Facebook.

“In the coming days, a new professional chapter will open for me”, writes the former minister on his Facebook profile: “I will leave my national political and institutional responsibilities to begin an experience at FAO as Special Advisor and Deputy Director-General. As many can understand, I am full of emotions announcing this choice: after more than twenty years of direct political militancy, I take a new step in the international diplomatic experience”.

Martina expressed his gratitude to Director General Qu Dongyu, for the trust he placed in him. He also thanked the Italian government for having followed through with the proposal, with the valuable help of the Minister of Foreign Affairs and the Farnesina, as well as the Permanent Mission to the International Organizations in Rome.

The former Minister summarized past experiences and underlined future challenges: “The 2015 Expo experience and my work at the Ministry of Agriculture, Food and Forestry allowed me to develop  skills and enriched my tool set on this front. Whether it was the fight against illegal hirings (the so called “caporalato”), or the defense of the income of our farmers, I have always been guided by certain fundamental principles. I now have the opportunity to continue this commitment at the service of an extraordinary multilateral organization such as FAO. I will be working on issues relevant for the G20 agenda, and on initiative, such as the next UN Food Summit and the Food Coalition, at the heart of Italy’s committment to FAO. I believe in a new chapter of multilateral cooperation, to be measured without reluctance even with its limits, to be able to offer today and in the future the right answers to the international community”.

Martina recently published an essay for Mondadori, entitled “Sovereign food, global food wars in times of the virus”, which discusses issues related to food in times of a pandemic. He was Minister of Agricultural Policies under the Renzi and Gentiloni governments, and was given responsibility for organizing Milan’s Expo in 2015. (@OnuItalia)