ROME, MARCH 6 – Upon proposal of the Italian Vice Minister for Foreign Affairs and International Cooperation Emanuela Del Re, Italy contributed 300.000 Euros to work in partnership with the WHO in East Ukraine to prevent diseases to spread, to get children vaccinated, to safeguard people’s health.

Only a few years ago Ukraine has the lowest vaccination rates of any European country, and health experts were alarmed. They were warning that the situation has made the country vulnerable to a number of serious diseases, including polio and measles.

Over 12 000 people were infected with measles in Ukraine by May last year. Of those affected, 9158 have required hospitalization and 9 have died, according to information provided by national health authorities as of 27 April 2018. Large-scale outbreak response measures have been undertaken since the start of the outbreak in 2017 to curb further spread of the disease and restore high routine immunization coverage.

“Ukrainian health authorities, with WHO and UNICEF support, have recovered huge ground in the fight against measles. But there are still many vulnerable children and adults in the country; and this highly infectious disease continues to find them,” said  Marthe Everard, WHO Representative in Ukraine. “More needs to be done to ensure that everyone is protected.”

This nationwide drop in immunization coverage left an increasing number of children in Ukraine susceptible to dangerous, preventable diseases, according to WHO. Among these dangers, it created the ideal setting for the extensive spread of measles, one of the most infectious diseases affecting humans. Measles can affect people of all ages, but infants, young children and older adults are the most at risk of serious measles-related complications and death. (@OnuItalia) 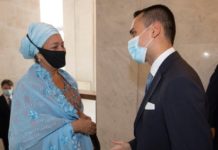