NEW YORK, JUL 16 – “There can be no military solution in Libya”, according to Italy and other major stakeholders (Egypt, France, United Arab Emirates, United Kingdom, United States). The Six countries issued a joint statement on hostilities in Tripoli — Experts consider it an unusual move, in light of some disagreements in the past.

Expressing their concern for the violence that has claimed more than 1,000 victim, the six governments called for an immediate de-escalation and halt to the current fighting, and urged the prompt return to the UN-mediated political process. They also reiterated their support for UN Special Representative of the Secretary-General Ghassan Salamé.

The text of the following statement on Libya was released by the Governments of Egypt, France, Italy, the United Arab Emirates, the United Kingdom, and the United States.

The governments of Egypt, France, Italy, the United Arab Emirates, the United Kingdom, and the United States reiterate their deep concern about ongoing hostilities in Tripoli, call for an immediate de-escalation and halt to the current fighting, and urge the prompt return to the UN-mediated political process. There can be no military solution in Libya.  Persistent violence has claimed nearly 1,100 lives, displaced more than 100,000, and fueled a growing humanitarian emergency.  The ongoing confrontation has threatened to destabilize Libya’s energy sector and exacerbated the tragedy of human migration in the Mediterranean.

We note our deep concerns about the ongoing attempts by terrorist groups to exploit the security vacuum in the country, call on all parties to the Tripoli conflict to dissociate themselves from all such terrorists and individuals designated by the UN Sanctions Committee, and renew our commitment to see those responsible for further instability held accountable.

We fully support the leadership of UN Special Representative of the Secretary-General Ghassan Salamé as he works to stabilize the situation in Tripoli, restore confidence in order to achieve a cessation of hostilities, expand his engagement throughout Libya, promote inclusive dialogue, and create the conditions for the resumption of the UN political process.  We need to re-energize UN mediation, which aims to promote a transitional government representing all Libyans, prepare for credible parliamentary and presidential elections, enable a fair allocation of resources, and advance the reunification of the Central Bank of Libya and other Libyan sovereign institutions.  We also call on all UN member states to fully respect their obligations to contribute to Libya’s peace and stability, prevent destabilizing arms shipments, and safeguard Libya’s oil resources in accordance with Security Council resolutions 2259 (2015), 2278 (2016), 2362 (2017), and 2473 (2019).  Finally, we remind all Libyan parties and institutions of their responsibility to protect civilians, safeguard civilian infrastructure, and facilitate access to humanitarian supplies. 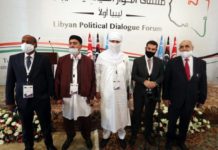