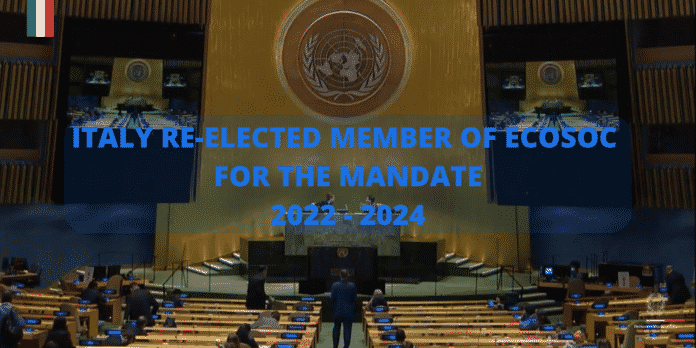 NEW YORK, JUNE 7 – Italy was re-elected today the UN Economic and Social Council (ECOSOC) for the three-year term 2022-2024 with 175 votes out of 182 valid votes, obtaining the highest number of votes among the Western European and Others Group (WEOG). It is a new, important election result for Italy at the United Nations, confirming the very high capital of confidence acquired by Italy in the field of multilateral diplomacy.

The ECOSOC is the UN’s central platform for reflection, debate, and innovative thinking on sustainable development. Established by the UN Charter in 1946, the Council is currently made up of 54 members (14 members from African states; 11 from Asia-Pacific states; six from Eastern European states; 10 from Latin American and Caribbean states; and 13 from WEOG states) and is considered the ‘operational arm’ of the UN for economics and development as one of the three bodies envisaged by the UN Charter along with the General Assembly and the Security Council. In addition to Italy, 17 other countries were elected: for the WEOG group also Canada (169 votes), Belgium (167) and the United States (166).

Following the election, starting next January, Italy’s tenth term as a Member State of ECOSOC will begin; at the end of the three-year period, Italy will have been a member of ECOSOC for 38 of the 78 years of the body’s existence, the last time from 2016 to 2018. “This election testifies to the consensus and reputation built by our country on the multilateral level, recognizing its long-standing commitment and action in support of economic growth, sustainable development and in the social sphere, especially in a crucial year like this one in which Italy – with the Presidency of the G20 and the partnership with the United Kingdom in the preparation of the UN Climate Change Conference – COP26 – is among the key players of the global project to redesign the post-pandemic rules and build more resilient and sustainable societies,” commented the outcome of the vote the Italian Permanent Representative to the UN, Mariangela Zappia. As ECOSOC member, Italy now intends to maintain its commitment, in close connection with its European partners, to the efforts of the United Nations and the work of the Council in the economic, social and environmental sphere, taking into account the extremely delicate scenario produced by the impact of the pandemic. It will do so according to a multi-stakeholder approach, including all parties that have an interest in the future of the planet – first of all young people – and in synergy with the many Italian NGOs that have received accreditation at ECOSOC on account of their valuable and articulated action to bring the United Nations closer to the demands and needs of civil society.

Among the immediate actions to be taken, according to Ambassador Zappia, it will be necessary first of all to work to reduce the setbacks caused by the pandemic on the road to achieving the 17 Goals of the 2030 Agenda, with all its dramatic consequences, including the increased global poverty rate and worsening social inequalities. (@OnuItalia)