NEW YORK, JUNE 23 – Italy joined 66 other UN member states in a statement confirming its “unwavering” support for the International Criminal Court “as an independent and impartial judicial institution”.The ICC “embodies our collective commitment to fight impunity for the most serious crimes”, the joint statement said.

The statement was issued following an executive order signed on 11 June by the President of the United States Donald Trump authorizing authorize economic sanctions and restrictions on travel for members of the Court investigating alleged war crimes by American troops and intelligence in Afghanistan.

In March, the ICC had launched an investigation into alleged war crimes in Afghanistan since 2003 with the possible involvement of US troops. Defending the president’s decision as part of his commitment “to protect the American military and national sovereignty”, the White House
accused the ICC of being “manipulated” by other nations.  (@OnuItalia) 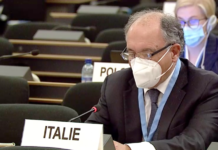