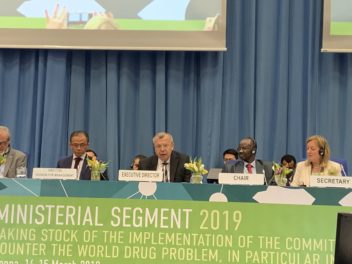 NEW YORK, MAY 9 – Italy has been re-elected to the UN Commission on Narcotic Drugs (CND), a key UN body established by the Economic and Social Council (ECOSOC) resolution 9(I) in 1946 to assist the ECOSOC in supervising the application of the international drug control treaties. The new Italian mandate will cover 2020-2023. Italy has been part of the Commission since 1976.

In 1991, the General Assembly (GA) expanded the mandate of the CND to enable it to function as the governing body of the UNODC. ECOSOC resolution 1999/30 requested the CND to structure its agenda with two distinct segments: a normative segment for discharging treaty-based and normative functions; and an operational segment for exercising the role as the governing body of UNODC.

The CND meets annually in Vienna when it considers and adopts a range of decisions and resolutions. Intersessional meetings of the CND are regularly convened to provide policy guidance to UNODC. Towards the end of each year, the CND meets at a reconvened session to consider budgetary and administrative matters as the governing body of the United Nations drug programme.

Subsidiary bodies of the CND are the Subcommission on Illicit Drug Traffic and Related Matters in the Near and Middle East and the meetings of the Heads of National Drug Law Enforcement Agencies (HONLEAs) for Africa, Asia and the Pacific, Latin America and the Caribbean, and Europe respectively. The purpose of these meetings is to coordinate activities and to monitor new trends within the respective regions. The recommendations of the subsidiary bodies are submitted to the sessions of the CND for its consideration and follow-up action.

In accordance with Council resolution 845 (XXXII), and 1147 (XLI), members are elected (a) from among the States Members of the United Nations and members of the specialized agencies and the Parties to the Single Convention on Narcotic Drugs, 1961, (b) with due regard to the adequate representation of countries that are important producers of opium or coca leaves, of countries that are important in the field of the manufacture of narcotic drugs, and of countries in which drug addiction or the illicit traffic in narcotic drugs constitutes an important problem and (c) taking into account the principle of equitable geographical distribution. (@OnuItalia)