ROME, DECEMBER 7 – As a concrete sign of Italy’s commitment and support of the action plan promoted by the UN Special Representative Ghassam Salamé, the Italian Foreign Ministry pledged a 600,000 euro contribution to the Libyan National Dialogue process.

“The contribution bears witness to Italy’s confidence in the path taken towards the Country’s institution-building and stabilization,” said the Minister of Foreign Affairs and International Cooperation, Angelino Alfano, commenting this aid intervention package, which is aimed at facilitating the Country’s political reconciliation process.

In addition to the National Dialogue, another 275,000-euro contribution has been allocated to the project “Promoting Elections for the People of Libyan” (PEPOL), which aims to support Libya’s High National Elections Commission in view of the implementation of the procedures to define electoral lists.

“It is further testimony to Italy’s full support of Libya’s democratic advancement process, which is in line with our traditional actions backing the Libyan National Dialogue,” said Minister Alfano. (@OnuItalia) 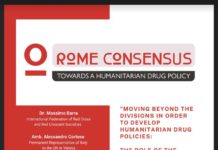