ROME, APRIL 24 -The Italian government has written to the European  Union asking to prepare a plan of action to address the  risk of a new wave of migrants escaping from the armed  conflict in Libya. Italy’s Foreign Minister Enzo Moavero Milanesi announced the initiative on Wednesday during a  joint news conference in Rome after meeting with the United  Nation envoy to Libya, Ghassan Salame’.

Moavero didn’t provide additional details on Italy’s request. Italy’s anti-immigration Interior Minister Matteo Salvini has ordered that migrant rescue boats cannot enter Italian ports. In the press conference, Salame’ downplayed Italy’s fears that a huge number of African  refugees could leave Libya trying to reach Europe. “We know that about 700,000 migrants are in our country now,  but not even a minority of them wants to cross the  Mediterranean,” the UN envoy told journalists. In Libya the UN mission said that fightings near the capital Tripoli have reached a detention center holding hundreds of migrants. In Rome Salame’ met with Moavero and with the Italian Prime Minister Giuseppe Conte. Preceded by an interview with the Corriere della Sera in which he encouraged Italy and all UN member states to push for a ceasefire and the return to dialogue, the special representative called upon “a collective commitment to put an end to this selfish and useless conflict”, because, if instead the situation should deteriorate significantly, “the consequences would go well beyond Libya”. Salame’ added that “the only possible way to avoid the catastrophe” is dialogue. He added that the National Conference, although now impossible, in the long run remains essential: “Its logistical preparations are complete. No individual can subvert the popular will of the Libyans. And the Libyan people have expressed themselves clearly: they require the end of the transitional period, the wants to live in peace, they asks for a state based on the rule of law”.

Italy remains anchored to the UN road map for a democratic and inclusive path for all Libyans. Conte and Moavero confirmed this line in the talks with Salamè in Rome and in telephone calls by the foreign minister with European and Arab colleagues, such as Qatar and the Emirates, two states on opposite sides in the conflict, to emphasize that the Italian government “continues to dialogue with everybody”. Salame’ conceded that elections in Libya right now are impossible (even though some cities have chosen their mayors). His hope is to have the parties return to the table before Ramadan, which will begin in early May, with the goal to reschedule the National Conference, which had been hastily canceled after the first fightings, as soon as possible.

The Roman talks arrive while fightings have been underway in the area to the south of Tripoli for about three weeks armed between the forces of the self-proclaimed Libyan National Army, led by General Khalifa Haftar, and groups loyal to the Government of national agreement, headed by Fayez al Sarraj, head of the Presidential Council recognized by the United Nations. According to the most recent numbers provided by UN agencies, hostilities have caused at least 34,975 displaced, 264 dead and 1,266 wounded. The World Organization for Migration (IOM) today asked the international community to provide an additional $ 4.3 million to provide humanitarian assistance over the next three months. (@OnuItalia) 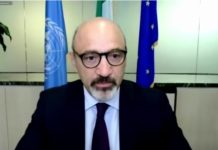 Gualtieri, “Italy joins Coalition of Finance Ministers for the Fight Against...