ROME, NOVEMBER 2 – Italy’s central role of in addressing the crisis in Libya, and its strong commitment within the United Nations’ institutions, were highlighted by the Italian Prime Minister, Paolo Gentiloni, and Italy’s Foreign Affairs Minister, Angelino Alfano. at the Rome MED-Mediterranean Dialogues. The Third edition of MED took place in the Italian capital from 30 November to 2 December.

According to Gentiloni, Libya’s political agreement signed on December 17th 2015 in Skhirat, in Morocco, had some Italian root. And Italy, he said, fully suports the mission of the UN special representative for Libya, Ghassan Salamè.

“The Skhirat agreements come from intuitions born here in Rome, within the MED-Mediterranean Dialogues initiative and the diplomatic conference led in this framework”,  Gentiloni pointed out on Saturday, at the closing session of the three-day event who took place at the Parco dei Principi Hotel in Rome. The premier expressed his “great appreciation for Mr. Ghassan Salamé’s efforts aimed at creating a more inclusive and stronger Libyan government and making possible general elections” in the Northern African country. “This is the right path towards stabilization, supported in Washington by al-Sarraj”, Gentiloni added, referring to the Chairman of the Presidential Council of Libya and Prime Minister of the Government of National Accord (GNA) of Libya, who was received by the US President Donald Trump on Saturday.

In response to a question by OnuItalia during a joint press-conference with Mr. Salamé, FM Angelino Alfano underlined how “Libya has been at the center of Italy’s diplomatic action during the Italian Presidency of the UN Security Council in the month of November”. “We have obtained excellent results”,  the minister said, stressing the Italian commitment in arriving to a “central command” able to face the Libyan crisis in a coordinated way, given to Ghassan Salamé. “We fully support his action plan”, Mr. Alfano said. If Libya represents the most satisfactory issue handled during the month of November, together with the UN Resolution on the protection of cultural heritage, Alfano expressed his disappointment for the missed opportunity to renew Jim, an international inquiry into chemical weapons attacks in Syria, blocked by a Russian veto. “Nevertheless, Italy will continue to work to convince Russia and its Foreign Affairs minister, Mr. Lavrov (who joined thee Med Conference in Rome on Friday) on our common interests in keeping accountable who committed such crimes”. According to Alfano, holding free elections in Libya is a key condition for stability in the Northern African country, where, Ghassan Salamé confirmed people will be summoned to vote in 2018. “We have discussed the latest developments and shared our views on what will happen in Libya in the coming weeks – explained the UN special envoy -. I hope to meet General Haftar as soon as possible to guarantee him that we are preparing the ground to hold free elections next year”. Elections “won’t patch things up” but possibly they “will pave the way to a long term solution that will bring stability to Libya”, according to Salamé, who highlighted that “security conditions must be respected during the consultation as well as the new electoral law”. Salamé assured the UN commitment to “keep on working to gather all the necessary conditions to hold national elections”, and asked Libyans to seize “the opportunity to decide” what “institutions, no more temporary, but permanent”, their country will have. 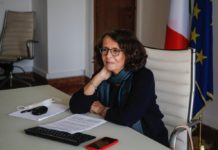