NEW YORK, SEPTEMBER 9 – “This High-Level Meeting provides every year a fresh opportunity to increase the public’s awareness on the devastating effects of nuclear weapons and of nuclear testing on the environment and human life. It also allows us to further highlight the need for the cessation of any nuclear testing and to restate our commitment towards the ultimate goal of a peaceful and secure world, free of nuclear weapons. It is a goal that, in our view, can be attained through a progressive approach, based on concrete and verifiable measures, aimed at enhancing mutual confidence and at increasing the perception of a solid international security,” Ambassador Mariangela Zappia -Permanent Representative of Italy at the United Nations in New York- said, addressing aGeneral Assembly meeting on the Resolution on Cooperation between the United Nations and the Preparatory Commission For The Comprehensive Nuclear-Test-Ban Treaty Organization.

“This year marks the tenth anniversary of the International Day against Nuclear Tests,” Maria Fernanda Espinosa Garces, president of the General Assembly, reminded. “It’s the opportunity to reflect on our shared vision of nuclear disarmament and evaluate where we are directed if we continue on the present day trajectory”. Italy is an active supporter of the international architecture for disarmament and non-proliferation, said Zappia: “The CTBT represents one of the pillars of the multilateral disarmament and non-proliferation architecture the Non Proliferation Treaty (NPT) has established… Regrettably, more than twenty years after its opening for signature, the CTBT has not yet entered into force. It has, however, achieved two very important goals: it has paved the way for a moratoria on nuclear tests, which we call on all States to maintain, and, through its related organization, the CTBTO, it has created a highly effective global verification regime, whose invaluable role in quickly providing trustworthy and independent data has been repeatedly demonstrated. But progress along the way towards disarmament and non-proliferation requires that the current voluntary moratoria on nuclear test explosions be translated into a binding norm,  through the entering into force of the CTBT,” said the Ambassador.

Zappia concluded by reaffirming the plea to the DPRK of putting greater effort into the negotiations for the realization of a complete, verifiable and irreversible denuclearization of the Korean Peninsula. (@OnuItalia) 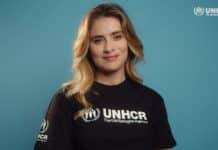 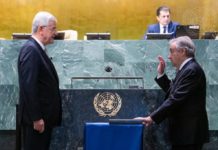 Wreck of boat that sank in Mediterranean arrives in Venice for...