NEW YORK, NOVEMBER 13 – Addressing an Arria Formula meeting of the Security Council on prison radicalization, Italy expressed its support to Resolution 2396 and the Madrid Guiding Principles. “The Italian methodology is based on the risk level assessment posed by each detainee, observation and training activities for prison officials”, the Deputy Permanent Representative to the UN Stefano Stefanile said confirming Italy’s commitment to improving action and international cooperation on this matter.

“The Italian correctional system is currently engaged in developing specific programs based on multiple sources of information and cooperation with different agencies. We are also committed to making all measures compliant with the human rights and dignity of detainees, in accordance with the Nelson Mandela Rules endorsed by the UN General Assembly”, said Stefanile.

Going into details on the Italian methodology system, grown out of programs originally designed for detainees convicted of mafia crimes, Stefanile said that detainees at high risk of prison radicalization include persons who have been convicted of terrorist crimes, expressed clear extremist ideology, or conducted recruitment activities. These detainees are placed in the “maximum security circuit” to prevent them from sharing their violent ideology with others, said the Italian Ambassador, while medium-risk detainees are placed instead  under observation and monitoring.

Furthermore, prison officials consider a range of specific “indicators” to detect early processes of radicalization, which may differ from person to person. Some of the following factors can be important indicators:
– Personal background including criminal record;
– Rejection of all public authority, refusal to share space and time with detainees who do not belong to the same group or religion, the use of terrorist symbols or acts of jubilation when terrorist attacks or similar events occur;
– Significant behavioral changes, such as self-isolation, drastic diets or visible change in appearance.

As far as treatment is concerned, the “Observation and Treatment Group” considers the detainees on a case-by-case basis, designing and adopting an individualized response for each of them, including transfers  for potential recruiters; investments in education, work projects, and/or sport initiatives are generally pursued and proven to be very productive; contacts with families and outside religious leaders are also facilitated when appropriate.

Training activities are crucial to implementing this methodology, added Stefanile. The Italian Correctional System has designed training courses and curricula for all the relevant prison officials to address the new forms of “radical thought,” with special attention to cultural and religious background. (@OnuItalia) 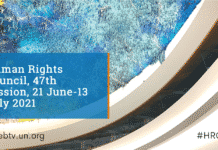