NEW YORK, DECEMBER 12 – Justice still needs to be done for victims of crimes in Darfur, the Italian ambassador to the UN Sebastiano card told today the UN Security Council following a briefing of the Prosecutor of the International Criminal Court (ICC), Fatou Bensouda, on Sudan and South Sudan.

Crimes continue to be committed in Darfur. In this regard, the recent visit of the Security Council Working Group on Children and Armed Conflict to Sudan from 26 to 29 November 2017, has shown, despite some progress, the persistence of inter-community conflicts, human rights violations – including sexual and gender-based violence; impunity and lack of accountability and attacks on IDPs in Darfur, Ambassador Cardi said.

The Court remains a complementary mechanism; however, there must be some stronger indication of genuine willingness to engage in domestic prosecutions, remarked the Italian delegate: “Priority in investigation and prosecution of course is for the territorial State, but at the same time, it is the entire International Community that is called to action when this kind of crimes are committed”, Cardi said, stressing, as Italy leaves the Council at the end of this year, the need to work on more robust processes to address and discuss the issues underpinning this situation.

In her briefing, Ms. Bensouda remarked that Omar Al Bashir recently travelled to countries that recognize the International Criminal Court (ICC) but none arrested or surrendered the Sudanese President. “I call on this Council to prioritise action on the outstanding warrants of arrest issued by the Court,” Fatou Bensouda told the Security Council in New York.

She also said that “there can be no justification for States Parties to fail to arrest a suspect against whom an ICC warrant of arrest has been issued, irrespective of that person’s official status.” 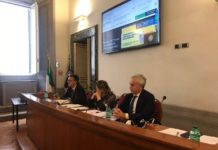