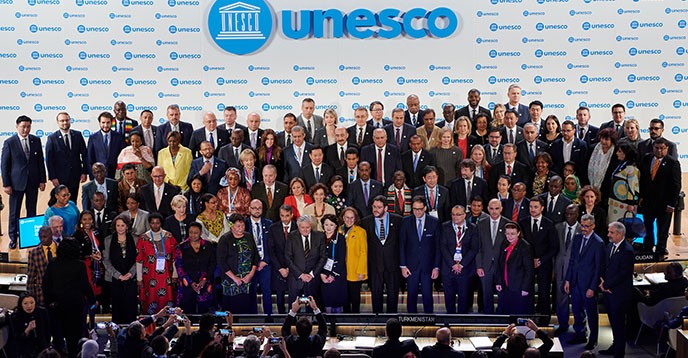 PARIS, NOVEMBER 19TH- Venice sets an example and a warning for the world: “What happened in Venice reminded us once again of our fragility in sight of climate change and natural disasters. This tragedy can become an opportunity to find solutions and prevent further damages: we must be able to react promptly, international action is needed, coordinated and guided by UNESCO”, said Dario Franceschini, the Italian Minister for cultural heritage, during his address at the Forum of Cultural Ministers at the 40th General Conference of UNESCO being held in Paris.

120 Ministers took part in the Forum, the largest such meeting in more than 20 years. “Twenty years separate us from this intergovernmental conference of culture ministers. Since then, the face of the world has changed. Culture has a fundamental role to play in rising to the challenges of our century. In the face of global fractures, and the paralysis of some institutional platforms, it is a common language that breaks down barriers,” declared the Director-General of UNESCO, Audrey Azoulay, as she opened the Forum.

Countries reaffirmed the value of cultural diversity as an essential component of all societies, of intercultural dialogue and social inclusion. They furthermore agreed about the importance of extending access to culture and heritage for urban and rural communities, for vulnerable groups including diasporas. Other major priorities expressed concerned the need to take stock of the impact of the creative industries, and to provide lifelong arts and culture education for all.

After the recent tides, the UNESCO World Heritage Centre is closely monitoring the state of conservation of the World Heritage site of Venice and its Lagoon.

Inscribed on the World Heritage List in 1987, Venice faces several threats from overtourism, damage caused by a steady stream of cruise ships, and from the potential negative effects of new developments. The site is also highly vulnerable to the negative impacts of climate change. The frequency of heavy rains and floods has increased in recent years in the Mediterranean region especially, and the intensity of such floods is rising. Other sites are also affected by serious floods, such as Matera in Southern Italy, inscribed on the World Heritage List as Sassi and the Park of the Rupestrian Churches of Matera.

“We must prepare ourselves for the risks caused by climate change and we must protect the lives and the culture of our populations. For this reason – explained Franceschini in his address to the Forum – initiatives like the ‘blue helmets for culture’ must be strengthened, to prevent and respond promptly to natural disasters. Because the global threats against our patrimony are not only terrorism, war and armed conflicts. And to respond to these perils we need an action plan for the protection of cultural heritage in light of climate change. The entire world -concluded Franceschini- must see the tragedy in Venice, because Venice is the world. Its cultural heritage belongs to humanity”. (SB@OnuItalia)