NEW YORK, OCTOBER12 – Giulia Parenti and Simone Mostratisi, the Italian Youth Delegates to the 74th General Assembly, were among the group of participants to the Youth Delegates program who recently met with Secretary General António Guterres. A statement, read by the Delegate of Germany, was presented to the head of the UN, emphasizing the need to increase youth participation in decision-making processes: “As a young generation we will be living with the consequences of the decisions made today. This is the reason why it is so crucial to involve us in every process on all levels”.

The Youth Delegates denounced the intergenerational gap that currently reigns decision-making processes: “Only 18 percent of the member-states of the United Nations have given young people a voice to be an active player on the international stage by implementing a youth delegate program, only five percent are outside of Europe”. Of the Countries participating in the Young Programme only four -Italy, Bulgaria, Mexico and the Czech Republic- allow their young delegates to negotiate during Third Committee sessions, rather than just participate as observers.

The Delegates furthermore took the opportunity to thank Guterres for having been “an activist in the fight against climate change” reminding him nevertheless that “this is not enough”.They called on the United Nations “to pick up” the climate fight that young people have been waging on the streets of cities worldwide: “There have to be more leaders speaking up and picking up the youth engagement we see on the streets worldwide in New York, Nairobi and Sydney fighting for a more sustainable world”.

“This issue can only be solved on the international level and we demand action towards this battle that we are experiencing. We have the capability to change the world, so let us do it together,” they concluded. (@OnuItalia) 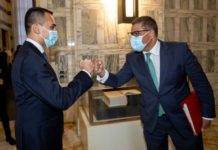