NAQOURA, MAY 16 – Earlier this month, UNIFIL received an unusual visitor. The Italian astronaut with the European Space agency Paolo Nespoli, who served in Lebanon as a young soldier from 1982 to 1984 with the Multinational Peacekeeping Force in Beirut, returned to Lebanon after 35 years.

In an interview during his visit to UNIFIL on 3 May, Mr. Nespoli said after returning to Italy in 1984, he left the military to give life to his “impossible dream” of becoming an astronaut. “If you have an impossible dream and if you don’t even start, it’s going to be really impossible,” he said. “It’s less impossible if you really start.”

He then attended university, received an engineering degree and in 1998, at the age of almost 50, he realized his “impossible dream” of becoming astronaut. Since then, he has flown to the space three times – in 2007, 2010 and 2017 – spending 313 days in total. “You need to dream and you need to dare,” he said.

Below, in his own words (with slight edits for space and clarity), he talks about his life as a soldier in Beirut and as an astronaut.

Life as a soldier in Beirut and thereafter

At that time (from 1982 to 1984), while in Beirut, I learnt two things: I saw how my uniform would make a difference to the population in Lebanon and I learnt that it is difficult to stay in a country without peace. When peace was undermined in Beirut due to attacks and bombings, we were evacuated, and I saw Beirut then from the ship, leaving back to Italy.

When I was in the space, I saw Beirut, Italy and the earth from the outer space. I did not identify myself with this or that country; I did not see borders; I only looked at the earth – our home. This changed my way of thinking. The Blue Line I saw from the outer space was the earth’s atmosphere with its blue colour surrounding the earth, which is the boundary between us and the space. When I am in the space, flying over the whole of Europe in a matter of minutes, I cannot distinguish between France, Switzerland, Italy or Austria. We all are in the same pot.

I grew up in a little town Verano Brianza in Milan, Italy. Since I was a child my dream was to become an astronaut but living in a small town made me confine my capabilities to the borders of that little town. By the time I understood that all these walls that we build around our lives are paper walls, then I discovered my capacities. I resumed my university studies in 1985. My journey from resuming studies till the coronation of my dream, of flying in a space shuttle, took me 20 years of hard work. From 400 km from the earth you see things in a different way. You see a planet under you. You look at earth and you feel that’s your house, that’s your planet – not any more the little islands, but the whole thing.

With the right knowledge and training, and with the right equipment, with the right mindset and finally with the right team, you can do impossible things. A person needs to dream and then to dare. Here on earth we look at the borders, look at the barriers… and then you go to the space and everything disappears. You are not talking any more about Lebanon, about the Middle East, about Europe… you are talking about the whole world. The earth is a ship that’s flying in the universe. We are all the sailors. Humanity should unite to keep this ship in a functioning order.

At the end, the earth is a little grain of sand among all the grains of sand of the whole deserts in the whole world. (UNIFIL/@OnuItalia) 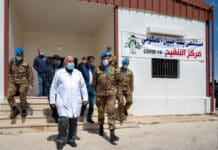 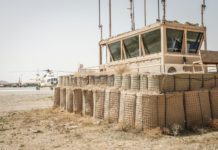