GENEVA, MARCH 20 – Infantile diarrhea is the second highest cause of child death. Each year circa 525,000 children under the age of five could have their life saved if only they had access to clean potable water and adequate hygiene. In Geneva, to celebrate World Water Day, Italy’s Vice Minister of Foreign Affairs, Emanuela Del Re, proposed instituting a global day against infantile diarrhea. The international day would serve to raise awareness of the causes and sustainable solutions to the problem for some of the world’s most vulnerable regions.

In a presentation at the United Nations office in Geneva, Del Re recalled that Italy is one of the signatories to the UN resolution that defines access to potable water and hygienic services as a fundamental human right. The Vice Minister went on to note that “water access and the sustainable management of water resources are becoming emergencies.” Del Re explained how current water sources face formidable pressure from changing demographics and climate change. It is estimated that by 2025 1.8 million people will live in water-scarce regions. Such an outcome will have grave implications for migration patterns and territorial disputes.

Additionally, the Vice Minister noted the important relationship between access to clean water and food security. “Many of the 800 million people in the world that still suffer from hunger live in regions that are water scarce. And that is just the tip of the iceberg,” said Del Re. The Vice Minister used her presentation time to note the importance of water as a resource that allows humanity to build resilient societies, and noted that “water guarantees the existence of other essential factors for social cohesion and economic progress.”.

Towards the end of her presentation at the United Nations, Del Re noted that balancing water resources with human demand will require the whole of the international community’s effort. However, she was careful to note the disparities of water resources throughout the world and stated that although economically strong countries have access to more resources, less economically developed countries are generally in control of larger territories. “Understanding this difference is essential in crafting a solution to the social-environmental crisis,” said Del Re.

Before presenting at the celebration for World Water Day, Del Re met with The Office of the United Nations High Commissioner for Refugees, Filippo Grandi, to discuss some humanitarian priorities and opportunities for cooperation in regards to the crisis. The Vice Minister also had meetings with members of organizations focused on public health, as well as with people from the International Committee of the Red Cross. 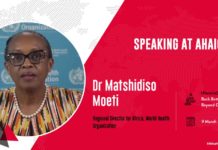