NEW YORK, JANUARY 14 – This year Italy will be strongly committed to tackling the UN 2020 priorities of: climate change, human rights, inclusion, and the reform of the United Nations.  “Raising ambition in the fight against climate change is an absolute priority for us,” said Italy’s Permanent Representative, Ambassador Mariangela Zappia, during a meeting convened by the President of the General Assembly on his priorities for the upcoming months. 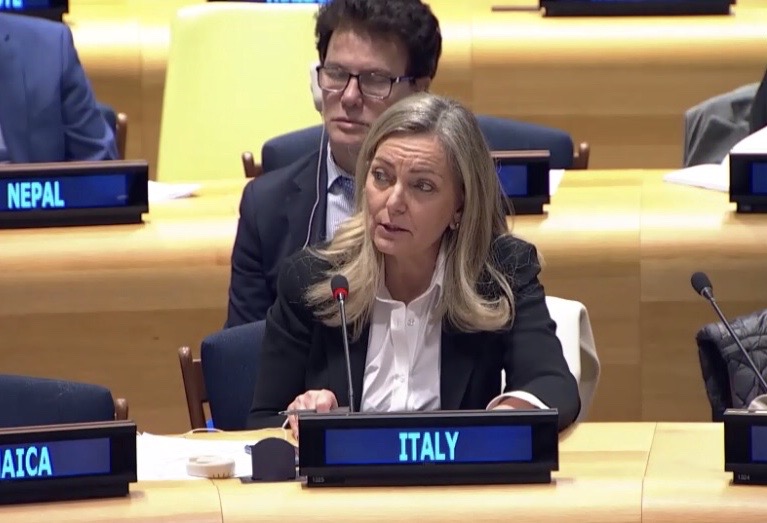 “Having already reached the 2020 EU targets on emission reduction, energy efficiency and use of renewable energy, We are determined to achieve climate neutrality by 2050 at the latest. In this spirit, we look forward to working together with the United Kingdom in order to organize a successful COP26 and its preparatory events,” said Zappia, who also reminded the Assembly that Italy will be hosting two COP preparatory events dedicated to youths and Africa.

The Ambassador underlined the significant efforts of Italy in the protection of oceans and biodiversity, which led to its appointment as co-facilitator of the Summit on Biodiversity along with Costa Rica.

Human rights and inclusion are two of the priorities set by the President of the General Assembly, for which Italy declared a full support. “The 25th anniversary of the Beijing Declaration and Platform for Action, and the 20th anniversary of UNSC resolution 1325 call upon us to work relentlessly to achieve gender parity for the sake of peace and prosperity for all,” stated Zappia. The Ambassador also spoke of the urgency of ensuring a full participation of young people and women in decision making processes.

Zappia concluded with emphasizing the importance of reforming the system of the UN and the Security Council in particular. “To enhance the Council’s authority and its effectiveness, we must aim for a new, expanded Council that is more transparent, more representative, more democratic and, most of all, more effective. This will make it more accountable to the wider membership and to the General Assembly, it will bolster its legitimacy in the eyes of the public, and it will improve its ability to deliver effective solutions for the maintenance of international peace and security”. (SB@OnuItalia)